The Dryad and the Storyteller
Healing Mythic Art 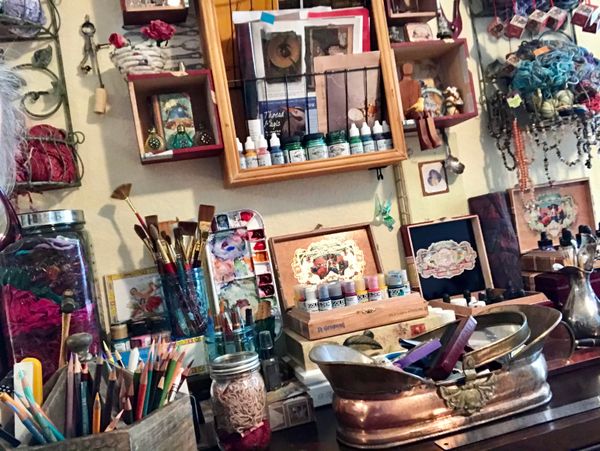 The artwork in these galleries chronicles the healing magic of storytelling within a creative, interconnected realm of myth, fairy tales and the forest. Images and illustrated videos incorporate photographs and original drawings of trees, leaves, bark and tree root systems created over a span of 35 years.

An unexpected journey into my own story led me to understand that something magical existed between our inner spirit, Earth's forests and the creative process of shared stories. Storytelling is a profound source of enlightenment and healing. From ancient oral tales to contemporary computer-generated images, shared stories are a bonding bridge between isolated belief and new insight. Stories have a unique ability to travel beyond logic into the deep ground of long-buried feelings — the roots of false perception — and supplant fallacy with truth.  Stories passed down through generations carry humanity's emotional history and diverse experience. By broadening our view point stories can bring us closer together and strengthen us with an enhanced sense of understanding, compassion and connection.

I hope sharing my story might help anyone burdened by lingering effects of trauma know that they are not alone. Together, our
stories can raise awareness for the benefit of anyone struggling with PTSD, adult survivors of childhood trauma and children in need today.

“I believe the best way to begin reconnecting humanity's heart, mind, and soul to nature is for us to share our individual stories.” 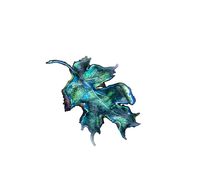 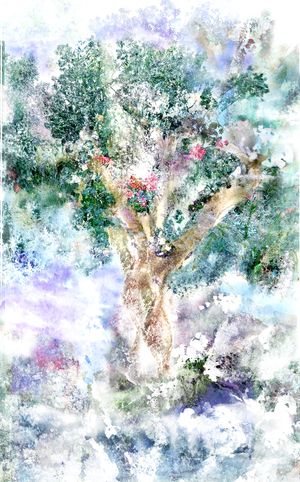 The woodlands of Faërie were living gateways to all that is interconnected, to journeys not bound by decree — a place of transformation where false perception might lose hold under the forested twilight of truth. Today, once-mythical stories of the forest have become scientific evidence recorded in the journals of the world's leading researchers. Forest breath is rich with immune strengthening, essential oils called phytoncides. Underground, wise-counsel tendrils of fungi weave informative, sun-sugared networks from one tree's roots to others within a forest community.

“As we walk slowly through the forest, seeing, listening, smelling, tasting and touching, we bring our rhythms into step with nature.”

Dr. Suzanne Simard, professor of Forest Ecology at the University of British Columbia,
heads The Mother Tree Project — a research project investigating the function of a forest's largest tree as the nerve center — the Mother — of a mycorrhizal network. Dr. Simard's 1997 research into the transfer of radioactive carbon gas from a Douglas Fir tree to a distant Paper Birch led to the phrase, “Wood Wide Web,” a whimsical name for interlacing, fungal extentions (mycelium) carrying information and nutrients from one tree's mycorrhizal roots to the roots of surrounding trees — including trees of different species!

Decades of research shared by Dr. Simard and German forester, Peter Wohlleben verified an enduring, unshakeable belief in trees as individuals with their own language and led to the 2016 Documentary Film, Intelligent Trees. Dr. Simard's steadfast voice inspired the underlying story for the 2009 James Cameron film, Avatar. The “Tree of Souls,” a massive, ancient Willow tree, is capable of connecting every Pandora life form to the souls of the Na'vi through its seeds and neural root system.

Interconnection between humanity and Nature is undeniable. Nature sustains our physical, emotional and social well-being. Fairy tales are entwined with this nurturing give-and-take between hero/heroine and Nature. A walk through the fairy-tale forest develops into a transformative journey along a path of resilience, truth and healing. In actuality, Earth's forests offer the same, and it is vital for us — it is humanity's responsibility to protect these gifts and our extraordinary planet.

As a child I was fascinated by fairy tales. The stories served as a remarkable resource fueling my imagination with the resilience I needed to persevere in a traumatic environment. The forest settings from the tales inspired me to seek refuge among trees where I had an instinctive sense of comfort and protection. In the 1970’s, I began a music career as a Los Angeles studio violinist working in Motion Picture, Television, and Recording. The entertainment industry, intertwined with multimedia storytelling, led to a growing interest in creative-arts healing and further study of therapeutic arts.

The idea to use my own art as story therapy originated after I unwittingly created a mythical representation of my own childhood in a digital collage. The images I had used; a child trapped in the tower of a castle, its walls covered in the ancient music script of Gregorian chants; a dragon hovering in the wall's shadowed crevices; a white rose splashed across the sky more like an explosion than a garden flower; all were blatantly symbolic of my life's story. 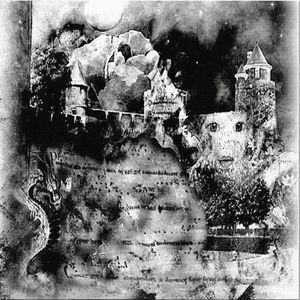 After this discovery of unintended symbolic content in a fairy-tale-like digital collage, I began a search for truth and sought out ways to use the arts as tools for exploration. I began with simple photos and moved to creating digital collage. In the process, I found that word and image combinations enabled me to express feelings better than one without another.

Initially, to incorporate language into images, I flipped through the old, well-worn pages of my childhood fairy-tale books letting my eyes scan the print in free association. Specific words and phrases flew from the pages to my attention, so I tore them out and added them to collages. A second step utilized illegible scribbles to represent thoughts, and a third incorporated legible text from well known literature. Lastly, as a tool, I added music. All of these techniques enabled me to freely express myself without fear of confrontation. Over time, the child I once was told me a story; our story. Through the fairy tales of my childhood, I found my own voice, and, ultimately, the truth I'd been unable to acknowledge. As I exchanged stories with fellow survivors, the weight of the past began to lift, and through these shared stories, we found ourselves mending the bones of each other's fractured realities.

When I think about all that has transpired since I began this healing journey, I am awed by insight gained through storytelling. Looking back to old perceptions, I see how our emotions play like clever tricksters, and our instinct for survival becomes a nettled labyrinth of shapeshifters — manipulating reality until we must negotiate with our deepest fiction — moving above it, below it, through it. . . poking enough holes until it disintegrates and exposes raw truth.

Below is a guide to the galleries, and, if you're in the mood for a little music, a music player with a selection of songs - from Ballad to Brazilian Samba - recorded by family and friends.

Gallery 1
Collage-story images with linked information for those
interested in woodland preservation and significant ecoregions.

track list
Use the music player at the bottom of any page. Click on the double arrows to move forward or backwards through the tracks.